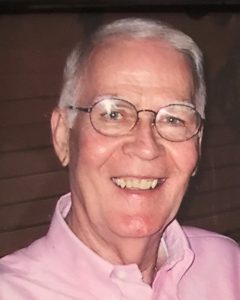 Charles William Zenker Jr. was born on January 11, 1930 to Charles and Evelyn Zenker in Hollywood, California.  The family left California in 1943 and moved to New Mexico before settling in Texas in 1945.  Chuck graduated from Amarillo High School and began college at Texas Tech before being drafted in 1952 into the US Army. He was honorably discharged in 1954 after service in the Counter Intelligence Corps (now the CIA).  Chuck returned to college at Baylor and graduated with his BBA in 1955, Masters in 1957 and attended Law School.  He joined State Farm Insurance in the fall of 1957 in Houston, Texas.  He retired in 2000 from State Farm after 43 years.  Chuck married Christine Reedy Zenker in 1988 and they were married for 32 years.

Chuck could be described as having a generous smile.  He remained intellectually curious and held a quick wit.  He was an avid reader, loved all sports and explored politics in depth.  He and Rush Limbaugh held similar views on almost every aspect.  Chuck loved music, most especially the American Standard Playbook. His favorite song being “I’ll be Seeing You”, a post war ballad.  His favorite movie was “Bridge on the River Kwai”. Chuck attended St Martha’s Catholic Church. He was a loving and supportive husband, proud father and grandfather. Chuck held a special bond with his only brother Gary. He was a very dear person and will be missed by many.

“Death is nothing at all. It does not count. I have only slipped away into the next room. Nothing has happened. Everything remains exactly as it was. I am I, and you are you, and the old life that we lived so fondly together is untouched, unchanged. Whatever we were to each other, that we are still. Call me by the old familiar name. Speak of me in the easy way which you always used. Put no difference into your tone. Wear no forced air of solemnity or sorrow. Laugh as we always laughed at the little jokes that we enjoyed together. Play, smile, think of me, pray for me. Let my name be ever the household word that it always was. Let it be spoken without an effort, without the ghost of a shadow upon it. Life means all that it ever meant. It is the same as it ever was. There is absolute and unbroken continuity. What is this death but a negligible accident? Why should I be out of mind because I am out of sight? I am but waiting for you, for an interval, somewhere very near, just round the corner. All is well. Nothing is hurt; nothing is lost. One brief moment and all will be as it was before. How we shall laugh at the trouble of parting when we meet again!”

What I remember about Chuck:
He loved his wife Chris very much.
He could eat more at one meal than anyone I knew-and never gain weight. He loved good food and sweets.
He was a dapper dresser.
He always ordered the house chardonnay.
He loved their dog, Lucy, and she loved him.
He could carry a tune and he had rhythm; a trait I admired.
He had a great smile and was photogenic.
On one of our trips to California we were all drinking wine at a sidewalk café (Chuck his house chardonnay of course) on a sunny afternoon. Someone told a funny joke, probably me, and all of us were really laughing uncontrollably. Chuck had tears running down his face for a long time. It was a great memory! He will be missed.

Chuck could relate to anyone and everyone!! :)One time while sitting next to Chuck at dinner after I had a few too many; he spoke my same language; and we actually understood each other and laughed and laughed!!

Chuck was my boss at the Astrodome Claims Office from 1987-1989 in Auto Claims. He was smart and witty. RIP Chuck…