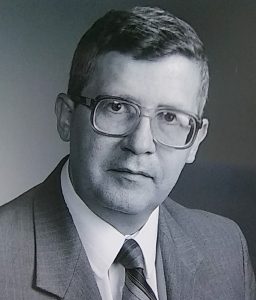 Jim was the third of five children born to Charles and Clarrice Hammond. He graduated from Virginia Polytechnic Institute and State University with a Bachelor of Science in Chemical Engineering. He was immediately hired by Esso and transferred to Baytown, Texas.

There, a friend set him up on a blind date with Miss. Joanna Ethridge. They married on November 16, 1962 and had three children together. Exxon transferred them to California, Florida, North Carolina, and finally back to Texas in 1972. A colleague suggested that Jim buy a house in a faraway subdivision of Houston that Exxon was trying to get started, called Kingwood. Jim and Joanna bought one of the first houses in Trailwood Village and made a home there for 47 years.

Jim was a board member on the Trailwood Village Community Association in the 70’s and 80’s. He was also a devoted member of Holy Comforter Lutheran Church, serving terms on the church council and the building committee, and teaching the Old Testament to 8th grade Sunday School students for 25+ years. His unique teaching style and silly ties made him everybody’s favorite Sunday School teacher!

In 1982, Jim left Exxon after 25 years to start Management Services Institute, Inc. with Scott Hensel. Shortly thereafter, MSI merged with Administaff, and Jim Hammond served on the original management team until the IPO in 1997.

When Jim retired from Administaff, he never really retired. He used his time and resources to address world hunger, support biodiesel production, and conduct solar powered water desalinization experiments. He also sat on the Board of Directors of Lutheran Social Services, was on the Board of Regents at Texas Lutheran University, and established the Hammond Family Foundation charity.

Jim enjoyed traveling the world with his wife and visited every continent except Antarctica. He especially loved spending time with his grandchildren, and often said they were the greatest reward of his life.

For the health and safety of family and friends, a memorial service will be held at a later date. In lieu of flowers, the family asks that cash donations be made to Humble Area Assistance Ministries (HAAM).

For the health and safety of family and friends, a memorial service will be held at a later date.

In lieu of flowers, the family asks that cash donations be made to Humble Area Assistance Ministries (HAAM).

Joanna so sorry to hear about Jim’s passing but rejoicing you two will be together again. Wonderful memories of days working with him.
Elaine

We remember Jim fondly, we send our love to you all. The Benjamin family

We send our sincere condolences to all of Jim’s family. We will never forget his incredible smile, sense of humour, and how he and Joanna helped us so much in Cayman. He will be missed.

Jim was out friend, mentor, advisor, teacher and so much more. His quiet ways of leading made us all better. Our kids adored him. I am so gratefull to have been blessed with his friendship.

I was so sorry to hear of Uncle Jims’ passing. He was always a lot of fun. Take comfort in knowing he’s in Heaven and you’ll see him again one day. Love you all!