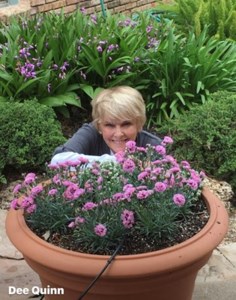 If the measure of someone’s life is about the impact they had on the people that they loved and that loved them, then Sheri “Dee” MiMi Quinn should be considered for the Wife, Mother, Grandmother, Sister Daughter and friend hall of fame.

Dee was born on August 19, 1945 and died on May 25, 2020 at the age of 74 and is survived by her husband Nick, her children Cari, Mark and Jeff, her daughters-in-law Bridget and Jessica, as well as her amazing grandchildren Gabby, Nick, Molly and Jake. She is also survived by her older sister Sue Pitzer and her husband Ron, Sue’s daughter Darcy Knouse and her husband Mark, her nephew Brett Mayhugh and his wife Diana, her Nephew Trent Dossett, and Niece Tricia Welch. Preceded in death by her parents Marvin Leo Dossett, Reva Elizabeth Dossett, her sister Kay Gehrmann and her husband Bill Gehrmann. Also preceded in death by her brother Larry Dossett and his wife Cheryl Dossett and two nephews Kenny Harryman and Trace Dossett.

Dee’s life was pretty simple but very full. She loved a deal so shopping to find that ultimate bargain was a sport to her. Dee would come home carrying only a few bags, (because the rest were hidden in the trunk of her car to be brought in after Nick was asleep). She would talk to Nick about the amount of money she saved him after buying all of these items at 50% off at which point Nick would remind her that with all of the money she was saving him, he would be able to retire much earlier than planned. Dee knew how to contribute.

She really needed to save that extra money to be able to fund the candy and Pepsi habit that she had. After Dee passed, Nick was cleaning up a few sections of the house that he wasn’t allowed in when Dee was alive, and he found stash after stash of chocolate and other assorted candies. It seems a little odd that you would hide things like, but what didn’t get hidden got eaten by Nick so in hindsight it makes perfect sense. A lap full of candy, and a good movie on the television, and MiMi was in her happy place.

Maybe more than anything else, MiMi was an incredible mother and grandmother. This came naturally to her because if you are going to do those jobs well, you have to have a very giving heart and she definitely had that covered. Nothing brought her more joy than to be around her kids and grand-kids playing games, telling stories, watching videos that she had found on her phone, or attending events featuring these special people. She always made time for you and was there to help, to listen, to support, and to put a boot in your butt if required. If you were to create a list of the most braggadocios people on planet earth, her name would have to be at the top of that list; but it was never about herself. She was so incredibly proud of her kids and grandkids that she just couldn’t contain it so if you were brave enough to ask about one of us, you had better settle in for the real answer, fully supported with an entire multimedia presentation on the latest and greatest accomplishments of her Quinn clan.

Her generosity didn’t stop there however, Dee spent over 17 years volunteering at Family Time Crisis and Counseling Center in Kingwood, Texas. In 2005 she received the Women Of Achievement Award as a result of her efforts to help people that found themselves in crisis. Dee knew that there were a lot of people out there that needed help and she made it her mission to be that person whenever she could. There is no telling how many people she was able to serve over those 17 years but her friends there tell us that she made a very profound impact on the lives of thousands of people in need of help.

She shared her life with her husband Nick who didn’t find her through Family Time but he definitely needed help! Nick was the trouble maker that MiMi was always having to clean up after. He was the loud one at the party, the guy wearing the crazy outfit, and was also the love of her life. It wasn’t always perfect for them, but one thing was always true; they share a profound love of their God and for each other. Until the end they were together, they were completely devoted to one another and they were IN LOVE.

Dee used to tell her kids, “Shine your light and don’t ever let anyone tell you to hide it under a bushel.” MiMi was a bright light when she was with us and because of how she lived, that light will shine on long after she is gone. Through her husband, her kids, her grand-kids, family, friends and the support and love she gave to people she didn’t even know.

Thanks for what you gave to us when you were here, now you can rest after a life well-lived. We know you are in Heaven with your Father looking after us now wrapped up in his perfect love and peace. You will be missed for now, but never forgotten!

St. Martha’s Catholic Church can only hold so many flower arrangements, so in lieu of flowers, the family requests memorial contributions to be sent to the following link, https://familytimeccc.org

We go back a long time. We always enjoyed seeing Dee and Nick at church. The last time we saw Dee we shared a table for brunch after church. She will be missed.

I am so sorry for your loss. Frankie Bankston

Hands down, one of the most memorable women I’ve ever known…from supporting our teenage antics, to her warm smile and genuine laugh, to her openness and presence, I will never forget you Mrs. Quinn!! You raised a beautiful family in your beautiful way and I am so grateful for your life. Blessings and love on your way into the netherworld…you’re spirit is so needed among the angels!

I was so sorry to hear about Dee. We were best friends since 3rd grade.So many good memories of the time we spent together.I will really miss her. I’m so sorry for your loss. Thoughts and prayers to your family.

Nick, I was shocked to learn of Dee’s death and I am so sorry for your great loss. Be assured of my prayers for you and the family at this very sad time.Sending love and blessings.

Oh the times we had running around after Bill,Mark,Cari,and “Todd”. You all created quite a void for the Gollier after you headed to Texas,but we managed to keep close tabs
We love all of you.

Oh,the times we had running after Billy,Mark,Cari, and “Todd”,You left quite a void in the Gollier family when you headed to Texas but we managed to keep close tabs and miss Dee terribly.We love you all.