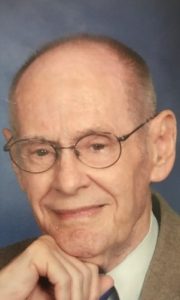 Donald Philip Warner, 86, of Kingwood passed away at home on Saturday, April 11, 2020 after a long illness. He was born on July 6, 1933 in Harrisburg, Pennsylvania and was the son of the late Rev. Philip and Edith (Sierer) Warner. Don graduated from Findlay College in 1955 with a degree in Psychology. He did post graduate work in Archaeology at the University of Pennsylvania in Philadelphia and worked for the School District of Philadelphia as a teacher before moving to King County, Washington where he was employed as an Industrial Engineer for The Boeing Company.

Don was a dreamer who always yearned to explore new places. He enjoyed both international and domestic travel, studying languages, working with his hands and learning new skills. He loved the outdoors, whether sailing or taking road trips to visit many of the National Parks in both the U.S. and Canada with his family. Don fulfilled his lifelong dream of learning to fly when, in his thirties, he learned to fly and repair his own Piper Cherokee Arrow airplane and later taught two of his three children how to fly and obtain their pilot’s license. Don also had an interest in science and technology. He was frequently one of the first to obtain the latest technological gadget, whether it be a scientific calculator, the newest camera, or trying his hand at building a telescope or home computer before they became common in households. After retiring and moving to Kingwood in the early 1990’s, Don became an avid fan of the Houston Astros.

Don was a longtime member of Kingwood First Presbyterian Church. Growing up in his father’s churches, he especially loved listening to the church organ and played a key role in selecting the new organ for KFPC.

On his behalf, Don’s family would like to express his gratitude to Altus Hospice Care for their devoted caregiving during his time of need. In lieu of flowers, the family asks that memorial donations be made to the Humble Area Assistance Ministries (HAAM) in Humble, TX. Due to the current COVID-19 outbreak, there will be no services at this time.