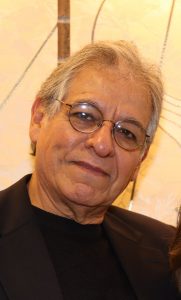 Jaime Salvador Gomez was born in Mexico City on January 26, 1948, the first and only son of Salvador Gomez and Concepcion Serrano. He was raised with three loving sisters, Martha Gomez, Bertha Yolanda Gomez, and Maricela Gomez (deceased). He graduated in mechanical engineering in May 1972 from the Instituto Politécnico Nacional in Mexico City.
In 1966 he met the girl with whom he was destined to spend his life. Jaime Gomez and Patricia Boulogne were married at The Church of the Miraculous Medal in Mexico on September 5, 1970. They were blessed with four children: Sandra Gomez Scheid (John), Jaime Salvador Gomez Jr. (Joanna), Luis Rafael Gomez (Kathryn), and Edgar Emanuel Gomez.
In 1979, Jaime’s career brought him to work with a large construction company in Brownsville, Texas. He moved his young family to a new country dreaming of a new bright future. After several years in Brownsville, Jaime became a very active member of Mary Mother of the Church Parish. Over the years he was a Eucharistic minister, led Baptism preparation, and together with Patricia, sponsored couples in marriage preparation.
In 1990, a deacon from his parish invited Jaime to visit the prison in Brownsville. Jaime was very reluctant, but the Lord had bigger plans for him. From that day, he was called to prison ministry and he never looked back. He changed his career and became a faithful soldier of God. He was in charge of the Diocese of Brownsville Prison Ministry for more than 15 years, diligently and enthusiastically recruiting volunteers and bringing hope to men and women in jails and prisons in South Texas.
Jaime and Patricia moved to Kingwood, Texas eight years ago to be closer to Sandra and Luis and their growing families. There, he continued his jail ministry work, visiting jails and one detention center. He participated in several ministries at St. Martha Catholic Church including visiting the sick in hospitals and coordinating the RCIA program for the Hispanic community of St. Martha’s.
Jaime was blessed with thirteen grandchildren. He loved them so much, and was always willing to play with them, giving them his time and sharing his infectious sense of humor.
Jaime went to meet the Lord on March 25, 2020, leaving a good example of an honest, happy man who was always ready to help. He will be greatly missed.
Jaime’s heart was always called to minister to the incarcerated and in the past few years he had discovered the ministry of Concerts for Hope. Concerts for Hope is a 503c organization which provides concerts by world renowned pianist Eric Genuis accompanied by world class vocalists, cellist and violinists who perform in prisons, including death row, to deliver a message of hope, mercy and God’s infinite love and forgiveness.

In lieu of flowers, please consider a donation to Concerts for Hope:
Donations online: www.concertsforhope.net
Checks: Concerts For Hope, PO Box 172, Simpsonville, KY 40067
May my beloved Jaime rest in peace.

We knew and loved Salvador for some 35 years. He and Patricia were the first friends we got when we moved to Brownsville. Salvador was an incredible person, always ready to help others. His children and ours are friends for life. We all will miss Salvador forever. We send our condolences to the Gomez Boulogne family

Jamie was a sweet kind man and a blessing of joy to be around. His humor would always bring a smile, giggle or laugh to your face. It was my honor to know Jamie and consider him family for the past 9 years. God took a good man home to finish out his Godly mission in life. R.I.P. Jamie, you will be dearly missed.

We only met last August but right away, we felt as if we knew you both from tears past, what and incredibly blessed family you are to have had him in your lives, May the Lord hold him in his loving arms resting in peace, and all of you are in our prayers