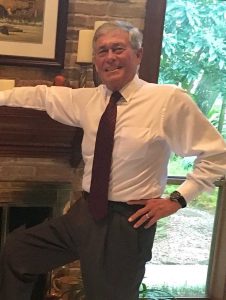 The world lost a great man on Monday, March 23, 2020. James Michael Cook, loving husband, father of 2 boys, and grandfather of 6 children, passed away at the age of 76 from a massive heart attack.
J. Mike was born on April 15, 1943 in White City, Kansas, to Paul and Audrey (North) Cook. He received his Bachelor of Arts in Journalism from the University of Kansas in 1965 and remained a passionate fan of Jayhawk sports until the end. On August 7, 1965, he married the love of his life, JoAnn Kutz. They raised two sons, Scott and Derek.
J. Mike was a passionate disciple of Christ who worshipped at Christ the King Church and demonstrated his love of God through works much more often than words. He also loved cooking (especially the art of Texas Barbeque), feeding the unfortunate, fishing with his sons, British sports cars, any movie with Humphrey Bogart or John Wayne, and absolutely all activities with family and friends. Those who knew him recognized that he was a man who lived life Big, savoring every single moment to its fullest. He was extremely generous with his time and when he spoke to anyone, it was as if they were the only one in the world. He was known for his humor, his infectious laugh, and his humongous servant’s heart. God’s good and faithful servant on earth has come home.
J. Mike was preceded in death by his father, Paul, and his mother, Audrey. He is survived by his wife, JoAnn, his two sons, Scott and Derek, their spouses, Tasha and Lynn, and his six grandchildren, Camryn, Holden, Jimmy, Remy, Sutton, and Charlie.
In light of concerns regarding public gatherings, the celebration of J. Mike’s life will be held in the future at a date to be determined and announced.

Services to be announced at a later date.

JoAnn, Derek, Scott, family.. our heartfelt and sincere condolences.
and may the peace of our Precious Lord surround and envelop you..may his memory be a blessing to you…Baldemar, Eric, Mark, Naomi Tonsul

JoAnn and family. It was a shock to learn of Mike’s passing. We had such wonderful times together some years ago. My sincere sympathies to you and your family.

My deepest sympathies to all of you. Mike will be deeply missed by all who knew, loved or called him a friend. Lifting you up in prayer and wishing you God’s Peace at this very difficult time.

I worked with Mike at Hisco. I was shocked to hear of his passing last week. I remember Mike as a man with a great smile and laugh. Someone was was very nice and fun to be around. My condolences to his wife and family. God Bless you Mike. RIP

Everybody loved this man of God.

My prayers are with you and your family at this time.