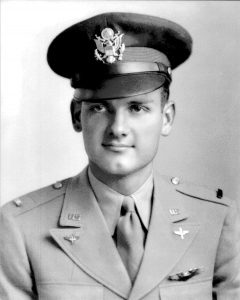 Alwyn I. (Van) Keese entered Heaven on February 22 ,2020 from Kingwood, Texas at the age of 101. He was born in Lyons, Texas on November 23, 1918 to David Alwyn and Mabel Hope Davenport Keese. Van graduated from Somerville High School in 1936 and went to work at Great Southern Life in Houston where he met Mary Vivian Doyle. They were married on April 12, 1942 at Baptist Temple in the Houston Heights.

After being drafted into the Army in 1942 Van volunteered for flight training and became a B-17 pilot. He flew 33 missions over Nazi occupied Europe and received the Air Medal and the Distinguished Flying Cross. After the war he went to work in the oil and gas industry, retiring from Sonat in 1982 as an internal auditor.

Van and Mary served the Lord at Baptist Temple for many years. Van was a Deacon, taught the Bible to 9 year old boys and Mary was the church organist. After moving to Wimberley, Texas in 1983 they continued to serve at First Baptist Church. In 2015 they moved to Kingwood to be near family.

Van was preceded in death by Mary his wife of more than 74 years, his parents David Alwyn and Mabel Hope Keese, his brother Jerry Keese and sister Nevalie Gutkowski. He is survived by son Larry and wife Jane, grandchildren Larry Keese Jr. and wife Loretta, Lesli Keese Ray and husband Kyle and seven great grandchildren, sister Virginia Discher and brother Travis Keese and wife Betty as well as several nieces and nephews.

A memorial service will be held on Saturday, March 14, 2020 at 2PM at Faith Family Baptist Church in Kingwood, Texas where Van was a member and greeter. The family would like to thank the wonderful staff and caregivers of Reunion Court in Kingwood and the nurses (especially Pilar) and staff of Grace Hospice. In lieu of flowers, the family would request donations to Faith Family Baptist Church.

A memorial service will be held on Saturday, March 14, 2020 at 2PM at Faith Family Baptist Church in Kingwood, Texas.

My thoughts add prayers are with you and your family! What a long life your Dad had! I did not realize that he was a fighter pilot. Of course, I have many fond memories of both he and your Mother! Our years together at BT bring back such sweet memories! Love to you both! Love, Carolyn

What an honor and privilege to have known and served with Mary and Van at FBC Wimberley. They were true servants of Jesus and His love. Our prayers are with you all.