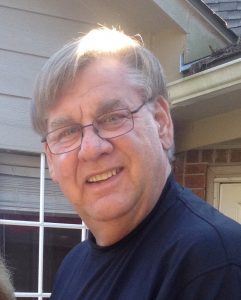 J Mark Kearns was born in St. Louis, Missouri on 14th of October 1953 to Joe and Tracy Kearns.  Best known as “Mark” to his friends and family, he grew up most of his formative years in Traverse City, Michigan where he met the love of his life Cathie Canham at Traverse City Central High School.  During Mark’s high school days, he developed a lifelong passion for sports and exceled in track and basketball.   After high school, Mark and Cathie were married on 27th of July 1974.  Later on, Mark was accepted and attended Michigan State University where he graduated in 1980 with a bachelor’s degree in business.
After college, Mark and Cathie were blessed with three beautiful children and moved from Michigan to Chicago, then Atlanta, eventually settling in Houston, Texas.  Mark quickly established himself as a business professional within the health care industry eventually raising to the executive levels.  His friends and colleagues always considered him a strong presence with a big personality and a great leader.  Despite the strains of his professional career, Mark made it a point to coach many of his children’s soccer and basketball teams. His love of sports included decades of YMCA basketball, swim team volunteering, refereeing soccer games and fishing whenever he found the time.
Mark was also a talented artist who enjoyed painting beautiful landscapes, seascapes, mountain ranges and wooded areas.  Whether it be at home or on travel, Mark always took the opportunity to explore the area and especially enjoyed painting the landscapes of the national parks like the Grand Canyon. He applied his artist skills to the theatre, and spent many hours backstage painting scenery, building sets, and occasionally making an onstage appearance.
Mark loved community, and expressed it through service: in sports, the arts & work, greeting neighbors, volunteering for projects, cheering on local teams, and sitting on neighborhood boards. Some of his best days were enjoying River Grove park, watching his dogs run free and advising fishermen on the bridge.
Mark was preceded in death by his parents, Tracy and Joe Kearns, and his daughter, Hailey Kearns.   He is survived and his life will be forever cherished by his wife, Cathie (Canham) Kearns, his children, Travis (m. Melissa Wabler), Kate (m. Joe Jaskolski) and Clay Kearns, and his granddaughter, Riot Kearns. He is also survived by his sister, Karen Kearns, his brothers, Pat, Tim & Danny Kearns, and several nieces and nephews.

The Kearns Family would like to thank everyone for their thoughts and prayers in this difficult time.

We are so sorry for your loss. David and I have your family in our prayers.

We are so sorry to learn of Mark’s passing. Our prayers to you, Cathie, and your family.

We so enjoyed having Mark as a member of our Keller Williams Northeast family. He had a true heart for his clients and always worked hard to insure that they were treated fairly and professionally. He will be missed.

A beautiful obituary for a great man!! I’m sincerely. sorry he was called home so soon. We have great memories of Mark!
Love Pat Stuntz

My prayers for your family. I will miss his presence dearly, but he will always be in my heart. I am a better man for having known him.

I met Mark when he started as a realtor at Keller Williams NE. We were both from Michigan and always remembered where we came from. Mark was cheerful, caring and always giving of his time to help others. He will surely be missed.

I have been truly blessed to know the Kearns Family through teaching at HHE. Every time I talked with Mark he was always a joy to be around. Such a true moral character about him that he instilled in his children. I know each of his family will cherish every memory & share them for a lifetime to come.