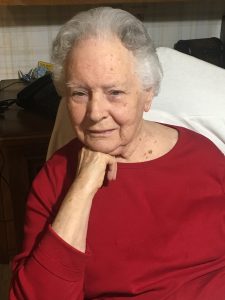 Marjorie was born in Port Chester, New York, to Anthony V. and Gertrude F. Savarese, the 2nd of 3 children, all daughters. Marjorie graduated from Liberty, New York, High School, and she became an RN after her graduation at Holy Name Hospital School of Nursing in Teaneck, New Jersey, in 1949. Marjorie first worked at the New York Hospital in New York City, and in 1956, Marjorie boldly and courageously accepted a job in the Middle East, in Saudi Arabia, from the Arabian American Oil Company, as a nurse at the hospital in Dhahran, Saudi Arabia. Marjorie would meet her husband, John, an accountant, in Dhahran.

Marjorie and John were married in 1961 at Our Lady of Mercy Catholic Church in Port Chester, New York, and daughters, Mary and Marie, were born and lived in Dhahran. The family returned to the United States in 1972 and moved to Kingwood, Texas in 1974.

Marjorie and John were founding members of St. Martha’s Catholic Church, and Marjorie, a devout Catholic who believed that one best served Christ by serving others, faithfully volunteered at St. Martha’s as a Eucharistic Minister, a Sacristan and at Adoration. When Martha’s Kitchen opened in 1992 (preparing, serving and cleaning up lunches to approximately 350-400 hungry men, women and children), it soon became one of her favorites, and Marjorie volunteered at Martha’s Kitchen once a week for 17 years.
In addition to her devotion to the Church, Marjorie volunteered as a dispatcher at the Kingwood Volunteer Fire Department for a number of years, and she volunteered for the Kingwood Library for nearly a decade. Marjorie also belonged to the Welcome Wagon, Hi Neighbor, the Trailwood Neighborhood Watch, drove patients to M.D. Anderson Hospital and organized drivers to drive patients to M.D. Anderson. Quite simply, Marjorie believed the world would be a nicer place if everyone practiced “Christian Charity,” advice that her daughters (while growing up) heard regularly! Marjorie openly welcomed extra hands from friends and neighbors at the various charities she served, and a dear neighbor quite fondly described her as an “Encourager” because Marjorie wholeheartedly invited others to assist at the various charities she served.

Marjorie remained current with her RN certification, and once her daughters were in high school, she worked as a surgical nurse in the neurology department at Methodist Hospital.
More than anything, Marjorie deeply loved her family, and she treasured every minute with them, particularly enjoying holidays (Christmas was her favorite) and the birthdays of her family members. She especially loved being a Grandma and a Great-Grandma!

Marjorie loved to travel, and she visited 49 of the 50 United States, most of Europe, the Panama Canal, Mexico, the Bahama Islands, Japan, Greece, Turkey and Egypt. Of course, she loved getting her hair done! She saw Mary Cowan weekly for many, many years, and twice a month by Karen Hewitt, this past year, here in the comfort of her home.

John and daughters, Mary and Marie, would like to extend their sincere thanks and gratitude to Marjorie’s doctors and to Encompass, and their deep appreciation to those who assisted in her care. Irma Goh faithfully prayed with Marjorie and brought Communion to her weekly; Rebecca Chavez kept her active through physical training (4 times a week since 2011); Robert Lewis received her “Honey-do” list for many years. Jacqueline Noss, Yvette Williams, Melony Bilderback and Tisha Yarbrough, were her devoted Caregivers. Edna Dickey has helped Marjorie with the house since the mid-1970s (and their mutual devotion to each other was undeniable and wonderful to see).

A Funeral Mass will be held for Mrs. Marjorie McQuillen on Friday, November 15, 2019 at 2:30pm at St. Martha Catholic Church in the Holy Family Chapel.

An interment service will be held on Monday, November 18, 2019 at 1:30pm at Houston National Cemetery. Attendees are asked to arrive in Lane 1.

6 replies on “McQuillen, Marjorie A.”

Marjorie, I am sure going to miss your friendly smile and warm hugs. I thank you and your wonderful family for allowing me to visit and pray with you and John. Your devout faith and love of the Eucharist has and will continue to strengthen my faith and my daily walk with God.
A friend always,
Irma Goh

MARJORIE, I WISH I HAD KNOWN YOU…DEEP SYMPATHY TO YOUR DEAR FAMILY

Rest in the Lord’s arms.

Marjorie was involved in St. Martha’s women’s Club with me, and I always appreciated her ideas and help. Thank you for your dear friendship, Marj!