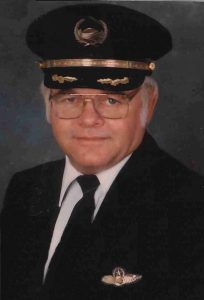 The family of Kingwood, TX resident, Ronald Charles Bauer, is sad to announce his passing at Noon on June 16, 2019 at the St. Luke’s Medical Center.  While in the presence of family, he went to be with his Lord at the age of 75.

Ronald was born in Belleville, IL on June 27th, 1943 to his loving parents Marcus Casper Bauer and Fern Ruby Hoffman.  He spent his formative years in Belleville working at the family business before attending college for three years.  He enlisted in the United States Navy in 1963 and served honorably  until 1969.  He was a Naval Pilot who served during the Vietnam war where he was awarded an Air Medal, National Defense Medal, and a Campaign Medal.    After his military career, he became a thriving commercial airline pilot and met his loving wife, Rosemary Louise Cole.  They married in Dallas, TX in 1975 and had two children.  Ronald flew for 35 years and rose to the rank of an International Captain on the Boeing 777 before retiring in 2003.  In retirement, he enjoyed golfing, playing the dulcimer, and working with therapy dogs.

Ronald is survived by his wife Rosemary Louise Bauer, his sons Dominic and Justin, his daughter from a previous marriage- Tiffany, and his brothers Marcus and Michael Bauer.

“Oh I have slipped the surly bonds of earth and danced the skies on laughter-silvered wings. Sunward I’ve climbed and joined the tumbling mirth of sun-split clouds—and done a hundred things you have not dreamed of—Wheeled and soared and swing high in the sunlit silence.  Hov’ring there I’ve chased the shouting wind along, and flung my eager craft through footless halls of air topped the windswept heights with easy grace.  Where never lark, or even eagle flew.  And, while with silent, lifting mind I’ve trod the high untrespassed sanctity of space.  Put out my hand, and touched the face of GOD.”

You’re a “heck of a guy” Captain, not only to work with….but to JUST KNOW. You’ve taught so many that “Quitters never win…and Winners never quit.” You’ll “live on” in our hearts, ’til we meet again.

Rosemary, I’m so sorry for your loss of Ron. My heart breaks for you. Please know you are loved. Always here for you, any little thing I can do. Love, prayers, and namaste. Love you. Carolyn

I was blessed to be able to fly with Ron on many occasions at PeoplExpress. Always the consummate gentleman and professional with a joyous personality. He will be missed. My deepest sympathy for his entire family.

Class A gentleman and a pleasure to be around…so very sorry for your loss .

No more missed fairways or three putts. Enjoyed the rounds we shared together. Prayers for the many that loved you. Dewey&Sandi Lockwood

As fine a man as I’ve ever known … and to have had the distinct pleasure of guiding airliners through the sky with him is a wonderful memory. His integrity stood out like a beacon — a very bright beacon. My most sincere condolences to his wonderful family.

He was the University of Illinois’ mascot Chief Illiniwek and Dick Butkus’ roommate. He was a US Navy aviator and finished his airline pilot career as a 777 captain. He survived a night in a capsized boat and two airplane crashes. He was a friar of great reknown. He lived in a haunted house. He was the most interesting man in the world. Best of all, he was a loyal friend to hundreds and loving father to his children and husband to Rosemary. Can you imagine the stories he has now?

Ron, you were one of the most outstanding aviators that I ever worked with. I hope your trip west was a good one and your memories will last forever.

May he rest in peace

Belatedly my condolence on Ron’s passing. While we went to grade and high school unfortunately had little contact with Ron over the years. However I would like to say growing up together I always considered Ron a friend. It seems like he was very successful during his life leaving his family with good memories. I’ll throw in that Another memory for me of Ron was that he was a pretty good baseball infielder in high school. Rest in peace Ron you were one of the good guys.