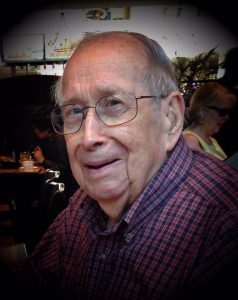 Ralph Charles Anderegg, 92, of Kingwood, TX, passed away peacefully on Easter Sunday April 21, 2019, surrounded by family. Ralph was born on February 5, 1927, to Alfred and Cora (Nixon) Anderegg in Buckhannon, WV, the fourth of 5 children. Ralph served in the Navy at the close of WW II before attending West Virginia University. He graduated in 1952 and 1956 with B.S. and M.S. degrees in geology. Ralph spent over 45 years working as a geologist in the oil and gas industry, a job he truly loved. Ralph called New Orleans home for 20 years and it was the place he developed his strong affection for fine steaks, Cajun food, jazz music, and vodka martinis. New Orleans was also the place where he met the love of his life, Molly Rose Breithaupt, who he married on November 29, 1969. They raised their 2 children, Stephanie and Kevin, in Kingwood, TX. Ralph was a quiet and caring man, ever the optimist, who loved sports, especially rooting for his West Virginia Mountaineers. He also enjoyed growing all kinds of vegetables in his backyard garden including tomatoes, green beans, asparagus, and squash.

A funeral mass will be held at St. Martha’s Catholic Church in Kingwood, TX, on April 26, 2019, at 11:00 AM. The funeral will be preceded by a viewing at 10:30 AM at the church. Following the mass, a reception will be held at the Anderegg home at 2603 Parkdale Drive, Kingwood, TX. Ralph’s body will be interred at Houston National Cemetery at a later date.

In lieu of flowers, memorials may be made to the charity of your choice or to the St Martha Catholic Church Capital Campaign.

To the Family, so sorry for your loss. Hope you will be comforted in knowing that Ralph has the prospect of being resurrected, healthy (in the flesh), to Paradise Earth just as Jehovah God has promised. In fact , the vast majority will enjoy everlasting life right here on earth as God had intended from the beginning. God’s Kingdom will do this under the rule of Jesus Christ. READ John 5:28, 29, Job 14:14, 15,Psalms 37:29, Matthew 6:9,10, Matthew 5:5 and Revelation 21:2-4 Go To: JW.ORG

My condolences and prayers.

I am sorry for your loss. May the God of comfort give your family the strength needed to endure. 2 Corinthians 1:3,4